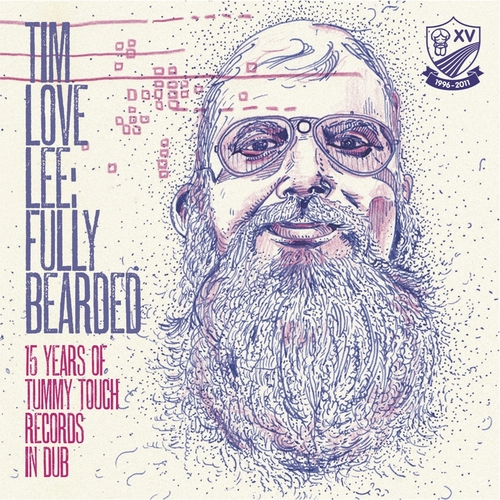 From it's roots as a cult dance music label and club night in East London to it's current homes in Brooklyn, New York, and at the UK’s legendary Rak Studios , Tummy Touch Records has been defying convention, resisting categorization and championing the unique musical vision of label founder Tim “Love” Lee. In honor of its 15 year anniversary Lee chronicles Tummy Touch’s output to date with an authentic and lovingly created dub album from across the labels catalogue. Fully Bearded: 15 Years of Tummy Touch in Dub will be released November 8th on Tummy Touch Records.

Since the first release back in 1994, if it's doped up, blissed-out or living on the margins of the acceptable, it's found a loving home at the label. Having launched the careers of artists like Groove Armada, Tom Vek and The Phenomenal Handclap Band, Tummy Touch now has, according to the BBC, “an influence far in excess of it’s tiny size.”

As the maverick A&R recluse behind Tummy Touch Records, Lee been DJing since 1988, releasing his own music since 1990 and working his studio magic on other people’s tracks since 1994. In his Brooklyn studio Lee created new sounds for Fully Bearded from raw audio tracks using a heavily modified vintage radio broadcasting mixing board and a handful of esoteric effects units.

With this year marking the 15th anniversary of the label, and alongside this album of old school dub mixes, Tummy Touch will be hosting a “birthday party show” at New York’s Hiro Ballroom on November 23rd. Phenomenal Handclap Band and Horse Meat Disco are among the performers. Tim Lee and special guests will be doing DJ sets throughout the night as well.

• Bing Ji Ling: Everybody Dub – A collaboration with Tommy Guerrero from the singer / guitarist with Phenomenal Handclap Band.

• Circuits: Dubbing At Dawn - Indie hopefuls from 2007 who imploded after their one and only tour of Japan.

• Little Barrie: Dub It Over – Tummy Touch will be taking care of the US release of the Nottingham blues rock trio’s new album.*

• New Young Pony Club: Dub Cherie* - Once signed to Tummy Touch as Organic Audio, NYPC have since taken the pop world by storm.

• Phenomenal Handclap Band: Following Dub* - A moody interpretation of the first single from PHB’s brand new album, Form And Control, which is released in Jan 2012.

• Striplight: No Dub No Entry – as featured on DFA’s “Not Wave” compilation.