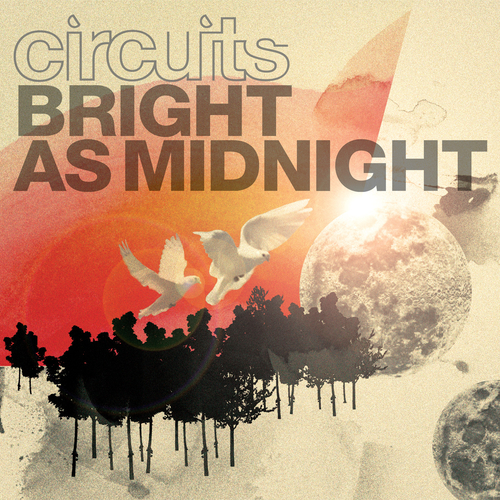 Pre-Order this stunning Debut here... all pre-orders are signed by the band!

As the band’s soaring new single Choir Invisible suggests, Circuits have produced an album of engagingly volatile indie-pop. From the youth imploding City of Lights, anthemic alienation of Exit Strategy, the riotous indecision of Question Mark Shaped Heart and Young Enough Not To Care, via soul searching and divine intervention, it is a broiling concoction of new wave punk, indie-dub and unbridled pop.

Having started the year with their single Before It’s Over firmly ensconced on XFM play lists, and heralded as Steve Lamacq’s ‘Record Of The Week’, Circuits jetted off to Japan. With their forthcoming debut album Bright As Midnight licensed to Sony imprint Lil Ballet, they completed a sell out three week tour. True to their indie-punk roots, and characteristically contrary to the mainstream industry, they played shows alongside local groups on Japan’s rock breeding ground; endearing themselves to a growing army of fans with their arrestingly vital agit-pop.

Feverishly anticipated by fans here in the UK, debut album Bright As Midnight is the culmination of the bands own, fiercely pursued DiY work ethic. 2007 saw Circuits release 2 singles, both to critical press and radio acclaim, through their own label and embark on a series of fan base building tours. Recorded in … 9 days at Rak Studios, their debut album is full of spontaneous live vigour and powerful songwriting that makes Circuits a formidable pop proposition.

What the press said of Circuits:
"Larynx tickling shoulder-pad indie-pop. Memorable enough to find yourself regurgitating them in the shower and dance-able enough to be requested down the local indie disco” ARTROCKER
"Circuits could be huge. Conquer stadiums and save rainforests" - GUARDIAN
"An impressive single. Boasting scratchy, angular riffs and punchy call and response vocals." THE FLY
“With punky soul, funky ska bass and big choruses, the result is an infectious concoction.” – SUN
"An eardrum-throttling reminder of why The Police didn't need to reform. Three perfectly formed minutes...Young Enough Not to Care, but smart enough to knock out dance floor destroying pop" - MUSIC WEEK
“Punchy, dancy indie-pop that evokes the spirit of buzzing London at night.” – DAILY STAR

MP3 format technical details
These mp3 tracks have been encoded with LAME providing you with a very rich listening experience. No DRM or copy protection is built in to the mp3s.

Unfortunately at this time we can't offer all the Circuits - Bright As Midnight tracks as individual wavs, as some of these tracks exceed the shops maximum (15.6666666666667mins) download length.

These longer wav tracks are available in the full album download.

Unfortunately at this time we can't offer all the Circuits - Bright As Midnight tracks as individual wavs, as some of these tracks exceed the shops maximum (15.6666666666667mins) download length.

These longer wav tracks are available in the full album download.